So it’s taken much longer to push out Part 2 of the High Performance WordPress post series but it’s back and hopefully won’t have as big a gap for Part 3! Last time in Part 1 we got you as far as selecting a VPS host (still loving Linode!) and your OS selection (Ubuntu 10.10).
Today, we’re going to dive into getting your shiny new VPS machine up and running on the most kickass, hottest web server stack making big big waves in the WordPress community and further afield. First, let’s take a look at what we hope to achieve:

I’m a great believer in not reinventing the wheel. In addition to being a brilliant host, Linode also offer a fantastic Library which provides documentation for setting up just about every kind of hosted platform you could think of in their data centres. It should be safe to assume at this point that you’ve setup a Linode running Ubuntu 10.10 and you’ve been able to login to that server as root via the shell. Too much already? This tutorial is probably not for you. Maybe go play with your new Linode and go through the Linode Library to figure out basic shell commands before continuing with this guide.

For those still paying attention now would be a good time to configure your basic Ubuntu instance with some sensible defaults. This is where the Linode Library and the Linode Getting Started guide comes in dead handy – this System Admin basics guide is great for sorting things like your timezone and installing htop. Go do that first. DON’T install any web servers just yet. We’ll get to that shortly.

All done? A quick checklist of the most important things should have just done:

If you do have any problems be sure to hop on over to the Linode forums. There are some super smart really helpful people over there.
Let’s move on.

Simply put – nginx rocks! Don’t get me wrong – I still love Apache. It’s been around forever and is still by far the most popular web server run WordPress. But Apache is a victim of it’s own success. Most common Apache deployments come with a LOT of baggage. Baggage that tends to not really matter for low traffic websites, but once you start to build your traffic levels it quickly becomes a bit of a dog unless you really understand how to tune it properly. It doesn’t help that the default Apache configuration is entirely inappropriate for modern VPS environments. nginx is a lightweight traffic handling powerhouse that is blisteringly fast with minimal configuration. The real beauty of nginx is just how much traffic you can throw at it on very modest low powered VPS machines. If you still don’t believe nginx is a viable alternative to Apache or Lightspeed or other new kids on the block like Cherokee, just take a look under the hood of WordPress.com (currently the 18th busiest website in the whole fricking world!) – which web server powers it? nginx. ‘Nuff said.

You’ll find a ton of tutorials online about how to install nginx. Personally, I’ve found this process as outlined on the nginx wiki is the most straightforward one. You’ll find lots of other tutorials suggesting installing it from source but to be honest with you if you’re not 100% comfortable with install packages from source already – now is not the time to start. The process I’ve described below will take you 5 minutes to complete and it won’t install a version of nginx that is horribly outdated (which the default ubuntu 10.10 packages are). We’ll also add a little twist to the install process which will become critical in a later part of the guide.

NOTE: If you attempt the nginx Ubuntu install commands, you’ll probably find that Ubuntu tells you that add-apt-repository is not installed. Go ahead and install that first by running:

After you have the python properties installed, go ahead and run the following:

Now normally, you would then simply run apt-get install nginx to complete the process. Well here is the little twist. We’re going to install a little gem which will make your life a little bit easier later on when we get to configuring caching servers. We’re going to install the nginx-extras PPA which contains the latest and greatest stable full version of the nginx web server and a whole load of other nginx extras and modules – (the full list of nginx extras contained in this package are here) meaning we won’t need to compile nginx from source later to add in common extras like HTTPRealIPModule (which will be very useful later when we configure our caching server Varnish). Hat tip to melon in the Linode forums.

So go ahead and install nginx with the extra goodies as follows:

Assuming you’ve a nice clean install process you should now be able to fire up your browser and enter your machine IP/hostname and see a nice big “Welcome to nginx!” welcome message. Congrats you’re now up and running with the world’s fastest web server!

On Ubuntu, the following a basic nginx commands that you’ll get to know pretty quickly:

Next up is PHP. Again this is pretty simple. We’re going to install PHP-FPM (FastCGI Process Manager) instead of your vanilla PHP version. PHP-FPM is an alternative FastCGI implementation designed specifically to cater for websites with high volumes of traffic where granular control over process management becomes essential.

Now go ahead with the PHP install process:

This will take a few minutes to run given the number of packages we’re installing in one go. Go read twitter for a few minutes.

Once the install is done, give everything a quick recycle to make sure all new settings kick in:

You may get this error during the PHP restart:

To supress this warning, we’ll go ahead and set a number of processes for php to start with in  /etc/php5/fpm/pool.d/www.conf

Don’t worry too much right now about what is going here. In a nutshell we’re setting a sensible default for how many php processes will be created on your small VPS. In the future as you become more familiar with how PHP-FPM processes are managed you can tweak this a lot more to tune it for your specific environment.

Go ahead and restart PHP-FPM (no need to restart nginx).

Then to make sure everything is working as expected, we’ll create a simple “Hello World” php page to ensure nginx is communicating properly with your PHP Backend. The default nginx web root is in /usr/share/nginx/www

Before we load the page, there’s one more config change we need to make. We need to tell nginx to pass off any requests for files ending with *.php to be passed to the PHP-FPM backend. Thankfully nginx comes with some simple config rules which can just be uncommented to activate this immediately on the default web root.

Scroll down and uncomment the following lines:

Save the file and restart nginx.

Go to your browser and load http://myip/hello.php 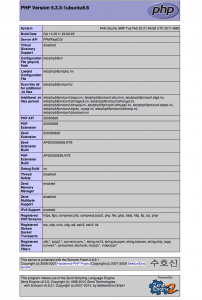 We’ll be coming back to this in Part 3 when we start to setup new web roots for your main WordPress website and add in WordPress specific nginx config rules. For now though we’ll go ahead and get MySQL up and running.

MySQL is very easy to get up and running on ubuntu. For this part of the guide, we’re essentially following this Linode guide.

Once the installer is done, run the MySQL hardening process to secure your installation:

It’s safe to assume you should follow the default prompts suggested on screen.

The Linode guide suggests further tweaks to the MySQL configuration file (my.cnf) to further tune MySQL for optimal performance in a low memory environment. These are definitely worth implementing.

Ok so now we’ve got MySQL up and running, let’s go ahead and test everything to ensure it all works as expected.

(NOTE: don’t forget the dot after your database name – that’s not a typo.)

This one is pretty straightforward too.

You will be prompted to select a web server. Straight away you’ll notice there’s no nginx option! Never fear it’s safe to select Apache 🙂

Again follow the on screen instructions to complete the install.
Once the install is done we need to tell nginx about it. If you wished you could setup a dedicated virtual host like dbmgmt.mydomain.com but I prefer to run phpMyAdmin off my IP on a separate port which is a bit more secure and can be locked down at the firewall.

Let’s go ahead and do that now.
This is our first foray into nginx vhost setup aswell!
cd /etc/nginx/sites-available
touch phpmyadmin
nano phpmyadmin

NOTE: Make sure you set correct values for:

listen: This should be the port you want to run the virtual host off – I’ve chosen 8084
server_name: This should be your public IP address. Everything else in the file should be fine as is.

UPDATE: Once you save this file, you’ll also need to enable this new site. Thanks to Alex for spotting this omission!

Save the file and restart nginx.

You should see the phpMyAdmin login screen. Go ahead and login with the root details creating during the install. And that’s phpMyAdmin installed!

Ok that’s it for Part 2 folks. We’ve covered a lot of ground today but we’re still only scratching the surface of our WordPress High Performance Guide. Part 3 will take us the full WordPress installation and configuration process for the nginx environment we have setup. Until next time!