Today we’re going to sqeeze even more performance out of your trusty little VPS by configuring and tuning an opcode cache for php.

What is an Opcode cache?

PHP differs from languages like Java and the .net framework in that it is an interpreted language meaning that each time you call a PHP script, the server must first read the contents of the script and compile the logic contained within to code that the operating system can understand (which is the Opcode bit). This is all fine and dandy if you’re running a low volume website with very simple non-memory intensive application logic. As soon as you start to use more complex PHP applications like WordPress and then throw in a bit of traffic things tend to get slower – quickly. A lot slower in fact.

All this “just in time” opcode compilation puts a lot of strain on your server in the form of memory usage.

When setup correctly (and correct setup is key) an Opcode Cache can significantly speed things up nicely. In a nutshell an Opcode Cache will load, parse and compile your PHP requests once and load them into memory (or disk) for reuse. The advantages to this should be immediately obvious – your server will not need to process load, parse and compile the same PHP requests every single time they are called – saving precious RAM and CPU cycles – which can translate to significant page load speed improvements.

With PHP becoming ever more popular over the past few years, lots of different Opcode caching options have emerged. Here are links to some of the more predominant options:

Which Opcode Cache is best?

I’ve played with all 3 of these extensively and I always come back to APC. APC will at some point come out of the box with future PHP releases. It was also the Opcode cache of choice for frickin Facebook for a long time. (Although I think Facebook now uses Hiphop exclusively which also comes with an implementation of APC).  You’ll see lots of debate about which one is best but APC is just dandy in my book and generally works really really well so let’s get on with the setup and configuration process.

To check and see if you’re already running APC, load your trusty phpinfo page and look for this: 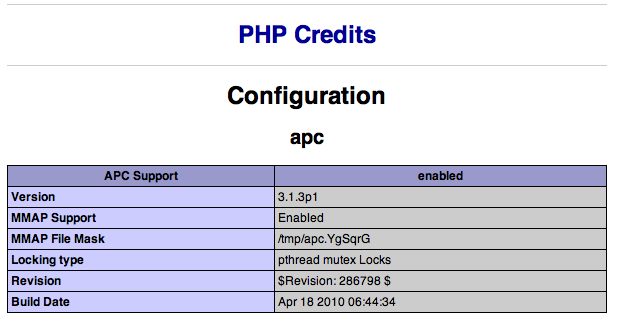 Sometimes just installing APC is “good enough” to get you up and running but you really should tune it for your specific website to avoid degrading your websites performance. Thankfully APC has a nice little script which helps us see what it is doing and in turns helps tune APC accordingly.

Log on to your shell account and grab a copy of the APC diagnostic script and drop it into your web root as follows:

Go ahead and open apc.php (use nano apc.php) which should now be in your web root and set a strong password to enable the script. Then open mydomain.com/apc.php and you should see some lovely data like this: 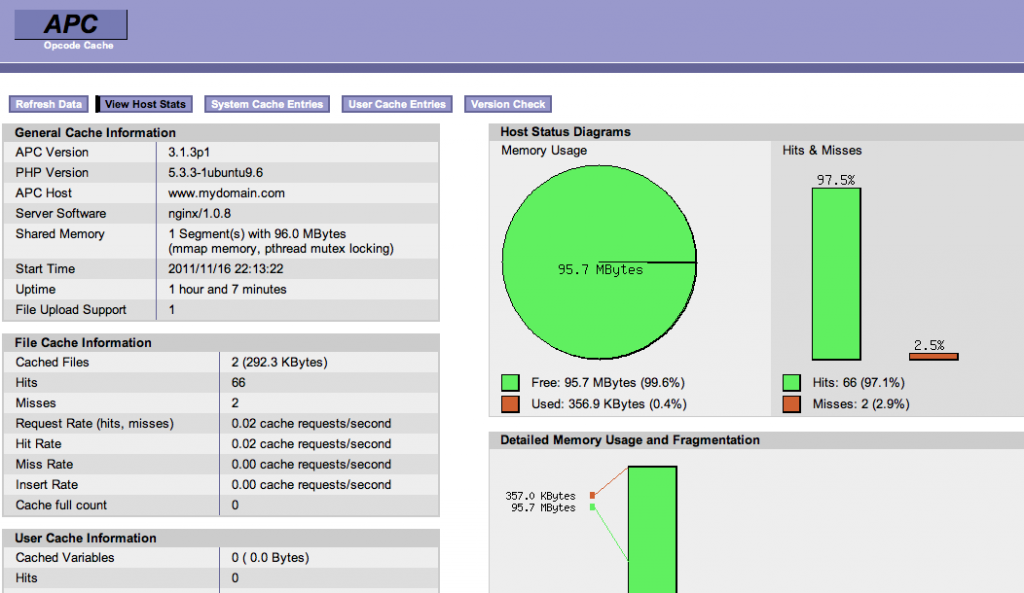 Right now most of this will mean diddly squat – that’s ok! There are a few really really important things you need to fully understand to get the true benefits of APC.

Once you understand these 2 fundamentals everything else after should be pretty straight forward. There is a lot of other fine tuning you can do to your APC install but your cache size and your hit ratio will be the main determinants of how effective APC is for your server.

I’ve included my typical APC config below. This config is used on a few nginx/php-fpm servers I’ve built out in the past couple of years that serve thousands of visitors per day with very healthy high 90%’s hit ratios and memory usage under 60% consistently.

To edit your APC config:

If you’re interested in what each of these values is for look no further than the main APC Runtime configuration docs.

That’s is for Part 4! In Part 5, we’ll be adding the final big layer or super charging for your server when we walk you through the process of setting up a Varnish Cache server to sit in front of nginx. Part 6 will then bring everything together when I walk you through our testing tools of choice for benchmarking server performance.

In the meantime your homework for this week (I would have loved if they taught this shit in school!) should be to tune your APC run time configuration for optimal memory assignment.

See you next week!